By Small Craft Fisherman January 14, 2017
It is inevitable in the Great White North.  The scorching, humid, summer is followed by the blazing colors of fall, followed by the blistering winter.  Said winter makes it difficult to kayak with ice thick enough to drive large vehicles on (though I have seen people attempt it).  Thus, we kayak fisherman take this lemon and make lemon vodka.  We bust out the shanties and ice poles, fill our flasks with vodka, and fill our ice-free coolers with beer (to keep it from freezing since it is so cold), and head out on the "hard water".

Hard water is a beast of its own.  Specific rods, reels, lures, bait, electronics, and augers to get you a hole through which you wet your line and (hopefully) retrieve some fish. In this area, others had been out sooner.  Some die-hards will go out on questionable ice, crawling across with plywood, tied to their buddies with a long rope.  Yes, I've kayaked in my fair share of conditions others wouldn't consider.  But, for me, ice is too unpredictable.  I can use my paddling experience to get me out of sketchy situations with my Bending Branches Angler Pro in my FeelFree Lure.  But on ice, I am at the mercy of the ice and if it decides to keep me dry.  I wait until it is plenty thick to head out.   After a mild start to winter which included blistering cold, snow, rain, melting, and blistering cold again, I was late to hit the ice this year.  I got out for my first hard water fishing trip over the new year holiday.

My first trip was a quick one on my local waters with family.  We drilled several holes.  After a few hours, we landed many key-chain worthy Perch and a couple keeper bluegill.  Though the bite was slow and the fish small, it felt good to get outside, get a line wet, and get some slime on my hands. 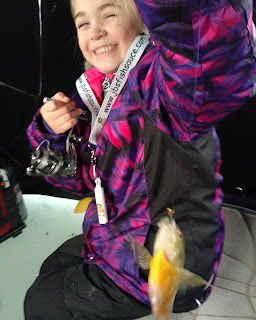 The second trip, my daughter came out with me.  She took a year on hiatus after stepping knee-deep into one of our ice holes the year prior.  Her comment,"Why did you put the holes inside the tent?!?!?!"  Now that her foot is bigger, and she understands the "tent" isn't for camping/playing, she was eager to get back out.  We landed a few nice fish, and she managed to catch the biggest crappie and bluegill of the day.  Though she eventually grew bored, we had a blast fishing and chatting in the "tent".

The next day, I headed out for a day-long trip with my buddy Chang Lor of www.cxfishing.com.  This was his first time ice fishing, ever.  I was excited to show him the ropes, and he was excited to try it (though I think he is disappointed there is no topwater bite ice fishing).

The day was warm (20s), but an incoming snow had it cloudy with high winds.  The winds bite through our layers, making time outside the warmth of the shanty difficult.  I put a hole in the ice and drop a Panfish Plastics Chigger Fry marinaded in JB's Fish Sauce into the hole.  I give Chang his crash-course on reading a flasher sonar and quickly pull a small Perch out of the water.  I would have preferred to do some scouting for a prime location, but frostbite was not in my plans for the day.  Given the conditions, I setup the shanty quicker than I'd like on one of my usual ice spots and fired up the Mr. Heater. 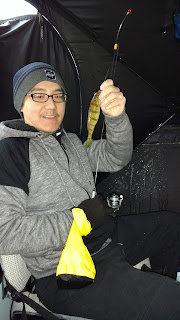 In a short time, the shanty is warm and we are marking fish.  Chang lands his first fish on ice, a small Perch!  It seems he may be hooked (pun fully intended).  We are both pulling a variety of Perch, Bluegill, and Crappie out of our holes.  Chang had his lure dialed in with a black Panfish Plastics Chigger Fry marinaded in JB's Fish Sauce.  I had to switch colors a few times to find another color that worked well (I don't like to fish the same colors in both holes).

After a few waves of fish (fish will come through in schools at various intervals when ice fishing), we come to a bit of a lull and rig up a tip-down and a whip-up with crappie minnows.  During said endeavor I manage to completely lose my feet under me and mess up my back, but forge on.  After successfully setting the crappie minnows, we head back into the warmth of the shanty where we land some more fish before another lull in the bite comes.

We decide to adventure into the bitter wind and do scouting in deeper water armed with the Panfish Plastics Chigger Fry.  I apply a layer of JBs Fish Sauce to the hook and jig head.  I drill a few scouting holes, check the depth and activity with the Vexilar.  After repeating this exercise three times before we locate a spot with a large school of fish.  We begin jigging but most of the school moves out without biting.  We are about to give up when my spring bobber dives quickly.  Fish on!

I start reeling in the unknown fish with the smaller of my ice poles spooled with 2 lb. test.  Bluegill put up a great fight, this feels like a bluegill.  Yet, it feels larger.  My suspicions are confirmed when I get the fish to the hole.  It IS a bluegill, the biggest one I've ever caught!  As my mouth drops, so does the fish.  I let my line go slightly slack, enough for the fish to shake off the hook back into the hole.  I quickly dive to the hole, sticking my hand into the icy water.  I have saved my fair share of fish this way when ice fishing.  But this time, the time it really counted, the fish swims away into the darkness below.  At this point I'm disappointed and we are freezing.  The fish are gone, this location is about as active as our current one.  We opt to head back to the shelter of the shanty and carry on.

We continue fishing the original spot, catching some nice Bluegill and Crappie.  Chang manages to land his first bass on ice and his first for 2017, it is a beast!  He sets a goal to best this early-year personal best.  I am confident he will do it. 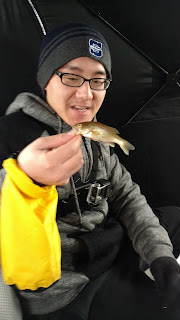 We enjoy a few more hours of fishing then the bite slows.  We have 9 keeper panfish and decide to call it a day.  We go through my packing ritual and part ways.  We plan to hit another location with some monster Pike next time (but on a warmer day when we can run to tip-ups).

Ice fishing is fun in its own way.  Some live and die by it.  I live and die by kayak fishing.  Ice fishing, however, temporarily satisfies my fishing appetite and fills my freezer with tasty panfish. I look forward to the next trip where we hope to pull some monster Pike and Bass through the ice.