By Small Craft Fisherman March 16, 2017
For those of us in the north it is inevitable.  Winter hits, water turns to ice, and our kayaks are put away to hibernate for the winter along with our souls.  This winter, I would open up the shed to sneak a peek and say hello to my Feelfree Lure and Bending Branches Angler Pro whilst they slumbered.  A tear would drip from my eye and instantly freeze.  Head hanging low, I shut and locked the shed before retreating to the warmth of the house.

A couple ice fishing trips slightly abated the urge to hit the water.  It at least gave me an opportunity to wet a line and land some fish.  But the odd weather this winter ranged from dangerously cold to dangerously warm.  This made for tough and/or unsafe ice conditions.  I was unable to get as much time on the "hard water" as I would have liked.  Still, I had to scratch the itch to fish.

I was able to accomplish this by stocking up for the upcoming season and the first season for Small Craft Outfitters, my new kayak sales/guide business.  Things were looking promising when we hit 60 degrees in February, unheard of in Wisconsin.  But, alas, the temperatures again fell, ice conditions were unsafe, and the urge to hit the water continued to grow.

My good buddy Chang Lor of www.cxfishing.com (and a Small Craft Outfitters Fishing Guide), conspired to do something crazy.  We were willing to scoot our kayaks across thin ice to get to open water at a local lake.  My wife wasn't thrilled about the adventure, but understood my need to float.

We reached out to our local kayak fishing buddies (and a new one from "Vikingland" aka Minnesota).  They were also willing to do the scoot, but our buddy John from the Wisconsin Kayak Fishing Club found an open body of water part of the Chippewa River system.  A much safer option, we chose the longer drive over the sketchy ice scoot. 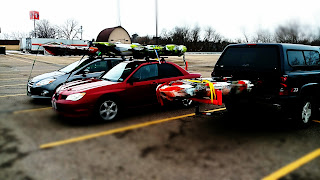 Our new friend from Minnesota meets at my house, closest to the unholy "Vikingland".  We then drive east, meeting Chang to officially start our official Feelfree Convoy.  We meet at John's place while he loaded up his yacht (Hobie PA 14) and then caravan to the launch.  We are all smiles.  I have to admit, I giggled with joy when pulling into the lot.  The snow in the lot was deep enough to hit my rocker panels on my car.  But I was going kayak fishing for the first time in months!  First time yakin' this year, first time on the water in months, and all but one of us are embarking on the maiden voyage of our kayaks (three of which are Feelfrees).

Some of us feel a bit lost.  Its been months since we performed our rig-and-launch routines.  And we all have new tackle, riggings, and boats.  It took a while for us to get our boats to the launch, but eventually were successful, took the first group launch photo of the year.  During our rigging and this key photo-op, several people drove through the area staring.  A local old-timer stopped, rolled down his window, and hollers, "Whatcha fishin' for!?".  I reply, "Whatever is biting.".  He chucked and said, "I like that.  I have lived here all of my life and have never seen a lineup like that!" referring to us standing like knights in front of our new molded steeds.  He wished us well, gave us a friendly wave, and drove off.  We unceremoniously mounted our steeds and pushed off.  Grinning from ear-to-ear. 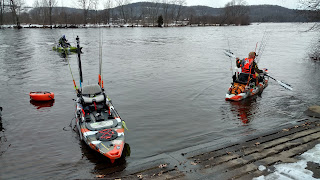 The air temperature was warm, but the skies were cloudy and the wind strong.  Strong enough to blow us upstream in this pool of the river.  But we were all happy to be floating again. My first real cast of the season was directly into a tree.  I underestimated the amazing casting distance my new Ardent Apex Elite reel, McCain LineCutterz Kayak Series rod, and Seaguar Invizix line was capable of.  I launched a jerkbait directly into a tree.  I grunted in frustration while laughing.  I was hoping to get the misfortune out of my system quickly while I was impressed with the performance of my new equipment.

Our group continued to paddle against the wind upstream.  We had whitecaps from the wind at our bows.  I laughed at them while alternating between my PowerTeam Lures Sick Stick, Northland Tackle Reed Runner Magnum Spinner (hoping for Musky/Pike), and my jerkbait. 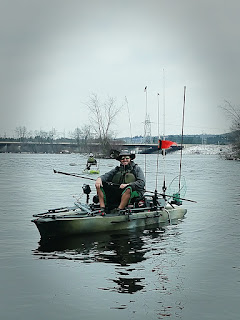 I got a few hits on my jerkbait, and a buddy got a few hits on some finesse plastics.  Unfortunately, our minds and bodies were more excited than the fish in the 32.5 degree water.  Our buddy John, in his new Hobie
PA14 was flippering all over the place with a gigantic smile on his face.  We all had smiles.  New boats what we were more than pleased with, floating for the first time in months, and in good company.

In the end we got skunked.  It happens, but we didn't care.  As we said at the takeout, we would rather get skunked now when we were learning our new gear.  We don't want to learn our new gear when we gotta worry about catching fish.

It was an amazing day, with amazing friends (including one new friend), what more can you ask for given the conditions.  Good friends, new friends, floating, and fishing!  An amazing day on the water!  Stay tuned as this was the last day of bass/pike/a few other species season in Wisconsin for most inland waters.  Thus, we hit the Mighty Mississippi soon for some Whatever Bites! 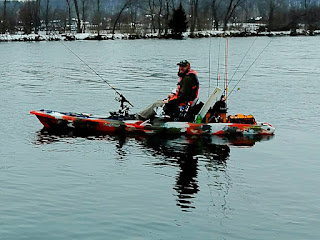