By Small Craft Fisherman May 15, 2017
It has been a long Wisconsin spring.  We had a wide range of weather and temperatures.  Anything from 20 degrees to 80, sunshine to snowfall.  This has made the bite difficult to lock down.  Early in the season the pike bite was hot on spinners during their spawn.  The temps rose and I was able to boat over 40 bass and a nice 4.5lb bass in one day on PowerTeam Lures Grubs and the James Gang Fishing Lovertail2 both covered in JBs Fishsauce.  The two weeks following were slow when the water temperatures dropped back into the 40s with the cold temps.  I was able to coax a few bites, but not the hot pre-spawn bite while temps were on the rise.  The first weekend in May, Wisconsin Fishing Opener, a sacred day to some (myself included), was no different.

I'm still in winter sleep mode, my mind still sleeping late to avoid the bitter cold mornings from the Wisconsin winter.  To avoid side affects (severe irritability) I ease into my summer up-and-at-em-for-fishing sleep schedule by waking up at dawn.  This allows me time to get up, gather my things, get to my home reservoir, and get on the water before sunrise.  This also allows me to beat most to the water.  This opening morning, my brother-in-law is also joining me for his first time kayak fishing.  He is now using the first boat that started my Small Craft adventures, his dad's 12 foot flat bottom jon boat with an old MinnKota.  A fine fishing machine, but no Feelfree Lure.

We arrive at the reservoir, unload his mighty steed, a Feelfree Lure 11.5.  Instead of a MinnKota older than he, his boat will be propelled with a Bending Branches Angler Ace.  An efficient, light, paddle to make his adventure easier.  It also has a lure retriever built into the blade, which is a key feature for someone I've previously called "The Snagmaster".  We finish our rigging and start rolling the kayaks towards the water.

A short time later we are paddling towards the dam.  We always target the areas accessible by larger boats first.  Once they begin to flock after sunup and warmer air temperatures, we retreat to the shallows where they can't go.  I watch the temperature on my Garmin Striker like a hawk, hoping for that magical number, 60.  Typically topwater starts working when temps raise above that magical number.

While paddling to our destination, we are spooking several panfish.  Unsure of the bass bite this early in the reservoir, we brought our ultralight gear as a backup.  We toss small Rooster Tails out and my brother-in-law quickly starts pulling them in.  Though not massive, still fun and immediately gets the skunk off of the trip.

A short time later, we carry on to our planned location.  Our efforts using various spinners along the dam are futile.  We opt to try the other side of the lake.  The sun hits it first, and the wind is starting to pick up, perhaps the water temps and shelter from the wind will help.

We arrive at our destination, deciding to toss the Rooster Tails again we begin hauling in several panfish, both Bluegill and Crappie.  We catch two nice "eater" Bluegill and I toss them in my Lure 13.5's cooler.  The panfish bite slowly dwindles, so we try our hand at the shallows without success.

At this point, we both caught bass.  The biggest approximately 4".  We are glad to have been successful with panfish, but we know the caliber bass in this reservoir.  We are disappointed not to have been able to snag into some, so we mix it up and move to a bay on the opposite side of the lake. 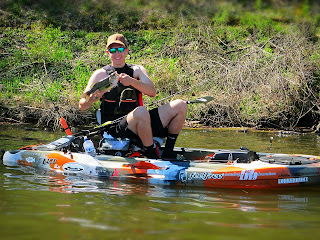 At this point, it is 10 AM.  The sun is up, causing us to have already shed some layers previously worn to abate the chill of 38 degree morning.  To make a long story short, we were nearly skunked on good bass until my brother-in-law managed to pull out a nice largemouth.  His first on a Feelfree Lure, or any kayak for that matter.  His smile said it all.

The stability, comfort, portability, and other features of the Lure made him like it.  Catching a nice bass in the kayak made him fall in love.  The sport of kayak fishing is exploding because of this.  There is nothing like being one with the water, your gear, your "home" in the seat and on the deck of a kayak.  Then you feel that first tug of a large fish.  But this time it is different.  This time, your vessel is smaller.  It tilts ever so slightly during the bite, rocks gently during the hookset, and starts moving towards the fish during the fight.  There is nothing like it, and that is why we love it.  That is why I do it, why I share these experiences with you, and why I started a business to bring people this joy in the sport.