By Small Craft Fisherman August 08, 2016
It has been longer than usual since my last article.  I thank my regular readers for their patience.  My wife had surgery (she is doing really well now) so I was playing nurse.  With the wife recovered, I was looking forward to my return from fishing, kayaking, and blogging hiatus.

The return started with planning a fishing trip with a nearby fishing buddy.  We were going to visit a local lake known for large bass.  I had only fished it once, briefly, but was pushed out by storms.  The bass were infrequent and small, but we decided it was worth a try.  The lake is small, but has promising vegetation, ledges, and other structure.  Locals also tell stories of monster bass being pulled from there.  Given the size and vegetation, it doesn't often see boat traffic.  A perfect place to hit with a group of kayakers.

We were also excited to learn two of the guys from the Wisconsin Kayak Bass Fishing Club were going to be in the area.  A perfect opportunity to fish with them since their local waters are 2-3 hours away.

I take my time the day before loading my kayak and gear.  I had been fishing so often, the process had almost become a muscle-memory.  Having taken time off, I was concerned about forgetting something.  After completing and triple-checking the vehicle, I'm satisfied and relax for the evening prior with a 6:00 AM planned start time.

As I near the lake in the Chippewa River Valley where the lake resides, I drop into a thick fog covering the valley.  With the rising sun blocked out, there is a chill in the air.  A welcome change after a week of temperatures in the 80s and 90s and 100% humidity.

I step out of my car, take a deep breath of the cool, fresh morning air and begin my unloading and rigging routine.  Shortly after I begin, the rest of the crew pulls in.  We exchange handshakes with those we haven't met outside social media and individually prepare our kayaks as the final fishing buddy for the day arrives.  They were fishing with a fellow kayak fisherman the day prior in Minnesota.  After a full day of fishing and a 2 hour drive, they were tired but eager to fish again. 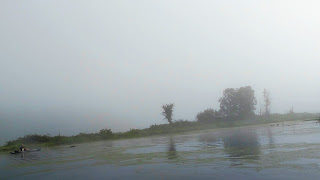 We hit the water and immediately two bass are pulled in near the launch.  Not huge, but a good sign.  Unfortunately, to make a long story short, the few others caught were very small.  Two of the guys decided to make the 2 hour drive back to their Minnesota fishing hole, their sights on moving to the top of the KBF Regional tournament for this month.  Three of us stayed behind determined to find the fish (and determined to avoid 4 hours of driving).  After another hour of fruitless fishing, we decide to pack up and migrate to another lake close by known for good fishing.

After loading we partake in a 10-minute-kayak-hauling-convoy to the next lake.  It is a beautiful lake.  Since it is still early in the day, it is not yet filled with recreational boaters.  We eagerly unload and launch. 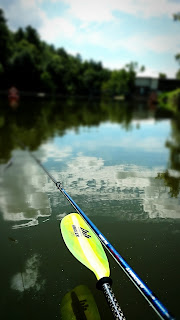 The lake is calm, the bottom mostly sand and structure-free. The water is like glass and the sky bright blue.  Timber is down near the rocky shore.  My Garmin Striker shows 5 feet near shore and 9 feet casting distance from shore.  Perfect conditions for cranking.  A couple casts in, I start getting hits.  I eventually end up pulling in 3 bass.  Small, but promising.  While cranking, one of my buddies hauls in a good size bass topwater near the bank.  He is able to snag into some smaller ones using the same tactics.

The bite turned off as the sun rose.  Continuing to work the banks with a variety of tactics we come to a rocky bank near a boat launch.  My Garmin Striker is marking fish around 4 feet.  My buddy hooked into a small bass near the shore.  Eagerly tossing a shallower crank in the area, I quickly haul in a bass.  Not large, but getting bigger.  While holding the fish on my hawg trough to snap a picture for my tournament, it slips out and self-releases back into the water.  To add to the frustration, the fish, eager to escape, was able to stick me twice with the new treble hooks on the crank.  Now bleeding, I cast and catch another bass about the same size.  This bass also manages to self release before I snap a picture.  Striking out on big fish this side of the lake, we decide to paddle to the opposite end.  Navionics indicates a weed mat and underwater stumps.  I plot the paddle, it is 1.6 miles across the lake.

Exhausted, we are determined to find the big bass we heard about at this fishery.  We take off across the lake in a long, tiring, but worth-while paddle.  We had partially intended on a race, but we quickly realized that would not be feasible due to our level of exhaustion and boat traffic.  We took our time getting to the new spot, but eventually made it alive.

Upon arrival, we are greeted by a few small stumps.  However, the water is getting a bit choppy from the wind and recreational boat traffic.  But the beautiful weed mat catches our eye.  The three of us are topwater junkies eager to get some great topwater bites. 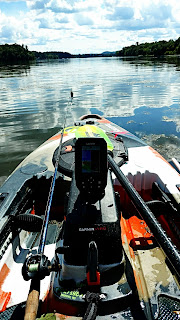 This area is topwater heaven.  The water clear, about 2-4 feet deep, surrounded by weed mats, fed by the river, and lined with brush.  One of my fishing buddies is able to land a healthy 18" bass.  He is able to land 3 more nice bass and a good sized Northern Pike in this area.  I float over top of two 18"+ bass that casually swim away and miss a few big topwater blowups.  My other fishing buddy is able to coax bass fishing under his kayak to attack, but not commit to his frog.  Shortly before leaving, he is able to land a nice 17" bass later through the thick weed mats.

The sun is dropping in the sky and we are exhausted.  We decide to point our bows towards the landing and make the 1 mile paddle back, in a headwind, to the launch.

We eventually make it back, exhausted.  Though we didn't catch trophy fish, we all were able to catch something.  We enjoyed our time on the water with new fishing buddies.  We talk about a potential river trip the following weekend with an even larger group closer to home.  We shake hands, part ways, exhausted, but smiling, and looking forward to our next adventure.
ardent reels bass bending branches feelfree feelfree kayak fishing kayak kayak bass fishing paddle rulethewater tourney tag tourney x