From Bass fishing to Bowfishing

By Unknown February 28, 2017
Two weekends ago was beyond busy...busy with fishing!  With the recent warm weather than we have been having I knew it was time to break the cabin fever.  It also meant I finally get to take my brand spankin new Hobie Pro Angler 14 out.  I was like a kid in a candy store as I spent all week getting it rigged up for its first voyage.
Now that the pre-excitement stage has been set...to the good stuff!  Sunday is when all the adventuring began.  I was meeting quite a few KBL members and other area kayak fisherman at Coffeen Lake, a local power plant lake in Southern-Central IL, for a preseason shootout (aka a friendly competition).  The day began for me around 3:30 a.m.  Even though it's only an hour and a half drive and we were meeting at 6 a.m., I could not sleep any longer! I was so excited to try out my new yak!  I paced as the coffee machine slowly but surely poured my caffeinated jolt that would get me to the boat ramp.  As I made my drive down their the fog was so bad that I drove the hour and a half with my eyes glued to the 10ft of visibility that I had.  As I arrived, I went milled around mingling with all the fellow anglers, but my heart was yearning to put the yak on the water!  Once everyone got their we finally pushed off from shore.  I adjusted my pedals and finally began taking in my new kayaking experience...HANDS FREE!..believe me, it makes a world of a distance!  As the day continued, I began to get to work and put fish in the boat.  I managed to catch somewhere between 20-30 fish throughout the day.  With my best 5 going 72.5".  Most came on a neko rigged Zoom Trick Worm, fished on a Medium Fast Kistler KLX spinning rod, teamed up with 15lb P-line  TCB 8 Hi-Vis Braid, with an 8lb Tactical Fluorocarbon leader.  A few others came off a shad patterned squarebill and a swing jighead with a Missile Baits Crawfather.  While it was a dink fest most of the day, I did managed one nice kicker fish!  Plus it gave me a good photo-op to show off the new 2017 jersey. 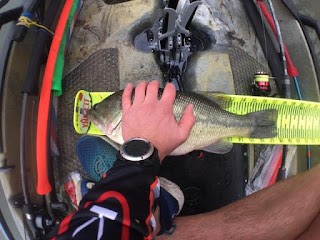 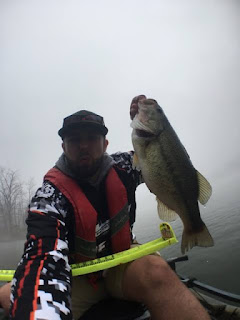 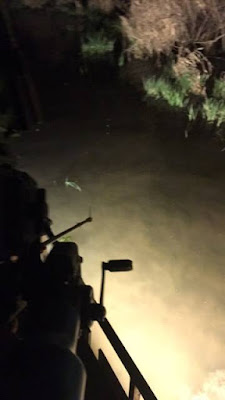 As the day came to an end, I expected to go home and relax while grilling out...  This soon become a daydream as I got that classic text I always love "bowfishing?".  Now there is only one correct way to answer this and that is YES!!!  Now I know some don't care for the act of killing carp in the act of pure fun, but in the lakes we go are infested with them, so please don't think any less of me.  While I do kill them for fun, my collegiate education in conservation biology knows it's beneficial for the environment.  Plus don't knock it until you try it because it's a ton of fun!  It was a fun, warm night out there, can't complain when its upper 50's at night in February!  We ended up shooting 27 fish between the three of us that went, not a bad night at all!
As I finally got home around 3am, it ended my 23 hour fishing excursion.  While it was one very very long day, it was a great day of fishing.  Many bass were caught and many carp were shot, testing both outdoor aspects that I love very much.  I can't wait for more days just like this in this coming spring and summer!