By Small Craft Fisherman March 07, 2018
First of all, I'd like to apologize to my regular readers for the silence.  I was going to school to become an EMT while dealing with some family health issues over the fall/winter.  I am back, and it feels good to be writing again!  My first big outing of 2018 was exactly what I needed to resurrect my writing.  A day kayak fishing with my good friend Chang of www.cxfishing.com!

It is March in Wisconsin.  Temperatures range from -10 to 45.  We can see 50+ degree swings in a day.  The robins and geese are returning from the south, bald eagles and ravens enjoying feasts of the roadkill previously frozen under feet of snow.  Wisconsinites are out in t-shirts and shorts, anxiously awaiting warm-weather activities.

When this happens you'll find a majority of Wisconsinites doing things the rest of the country would deem "crazy".  We wear shorts, we grill (though we never actually stop doing that all winter), we take convertibles out (top down), motorcycles will be spotted on the road, we'll still ice fish though it is rapidly melting, and we'll hit any open water we can for some walleye.  Chang and I took it to another level.

The plans started early in the week when the weather was melting the snow and reports showed temperatures maintaining 40s during the day.  We'd launch at Everts Resort in Hager City Wisconsin.  We had tested out the FeelFree Overdrive pedal system there in January.  Just below the dam between the Mississippi River Pools 3 and 4, they have open water all year. 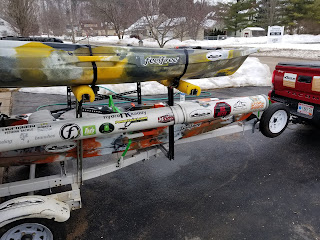 Saturday morning arrives, I am loaded and ready to go.  Chang is borrowing a Small Craft Outfitters kayak with a rudder because he is awaiting delivery of his pedal drive and rudder system for his.  He does, however, have a brand new Bending Branches Angler Pro in Raptor Green to propel him up the Mississippi.  Having just finished the Madison Fishing Expo in Madison, WI I moved mine from my show-friendly-shorter Lure 11.5 to my 13.5 for some extra space.

A 45 minute drive put us at Everts around 10 AM.  The parking lot was loaded, staff were there shuttling people out to the road for overflow parking with their UTV.  The driver pulls up as we are unloading the kayaks and says, "You guys are &*!$ crazy.".  He couldn't believe we are planning to go up by the dam with the big boats.  But we are used to pushing the limits and prepared for the challenge.  This said, DO NOT TRY THIS AT HOME.  These conditions were VERY dangerous.  Without proper experience and equipment the outcome would have been fatal. 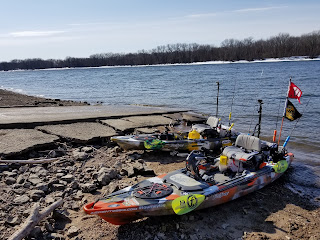 A short time later, our kayaks are rigged up and ready to go.  We are impressed with the relatively short rig time as the new equipment tends to throw off our rigging routine the first couple times in the year.  Leveraging (pun fully intended) the FeelFree wheel-in-the-keel of our Lures, we maneuver the kayaks near the top of the launch.  I manage to maneuver my truck and kayak trailer between others in the parking lot, negating the need for a shuttle.  After checking the drain plug for the third time on each kayak in these hypothermic conditions, we launch.

Chang is equipped with my Garmin Striker sonar and confirms the water temp at 36 degrees.  The wind is blowing HARD upstream at about 10-20 MPH.  My USGS scouting of the river flow at Red Wing, MN is confirmed.  There is nearly no current downstream.  Waves are about 1-3' with white caps making paddling dangerous.  My longer 13.5 is getting tossed around a bit because it is longer than the gaps in waves and gets twisted between them at times.  To add fuel to this watery fire, there are hundreds of boats chasing walleye.  They vary from jon boats to $80,000 fully setup brand-new walleye boats.  This boat traffic adds to the waves by clashing with them.  I feel like I'm riding a mechanical bull.  Except there is no pad below me, just 20 feet of certain hypothermia in the form of the Mississippi River.  Nonetheless we, continue on.

It is approximately a 1.5 mile paddle to the dam.  About halfway there, the wind is in our favor.  However, the random thrashing waves makes navigation difficult.  But eventually, we learn the kayaks blow sideways upstream well in the wind.  Not recommended in this heavy chop, but our experience and kayaks can handle it. 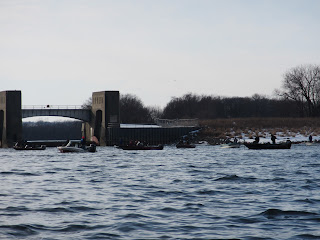 After some drifting, jigging, dragging without success we can see the dam and 150+ boats in the small area below the dam.  We continue to drift upstream and the boat traffic is crazy.  I've kayak fished Castle Rock Lake in Central Wisconsin, so I've experienced boat traffic and chop before.  But this was a whole new level.  Hundreds of boats in a small space, some of which are weaving between other boats at high rates of speed.  The wind is whipping up the Mississippi valley off the Wisconsin bluffs and increasing the chop.

After approximately a dozen boats went by buzzing us at high speeds, Chang said he was going to head closer to shore.  I concurred.  It was getting too crazy for comfort.  A local Sheriff boat was patrolling the area, but that wouldn't be helpful if a 5,000 pound boat going 40+ MPH t-boned us.  We got closer to shore and continued our float upstream thanks to the wind, and shortly thereafter came upon a slightly calmer section of water.  Then a kayaker's dream in a mess of boats.  Shallow water!

Chang and I use the shallow area as solace from the chaos experienced over the last hour or so.  I use this as an opportunity to inhale a sandwich while working the holes in the area.  With the rocks and debris in the holes, snags became common.  But we'll take snags over the boat chaos.  We each missed a few bites.  The fish kept robbing my minnows.  This being my first real open water fishing trip this year, I left some tackle (stinger hooks included) at home.  Oh well, I enjoyed the float, the company, and getting my line wet.

In the frigid water, fish were conserving energy, not the topwater blowups or spinnerbait slams Chang and I are accustomed to.  Thus, when I glance up to see what Chang is up to I didn't think anything of his rod bending over without the typical flick of a fish on.  Until I seen the surface break. 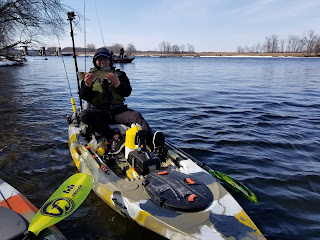 Anyone that has fished with Chang and I know we like to hollar when we catch something, it is muscle memory adding to the excitement of the catch.  I try to hold back, but the other boats take notice to my excitement and start flocking around us like a group of ravens on fresh roadkill in May. 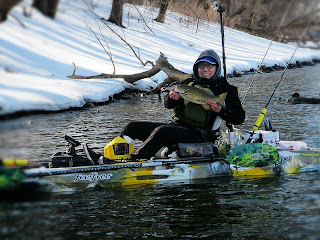 A few moments later, Chang lands a nice eater size walleye!  A quick use of the ruler on the shaft of our Bending Branches paddle has it just under 17".  The nearest boat looks and asks for details on how Chang caught it, a sign of a slow bite.  A short time later Chang manages to land another fish.  This time a Smallmouth Bass measuring 18".  It is a beautiful light brown in the post-winter water with the tiger stripes radiating from its head.  A beautiful fish, a female loaded with eggs. 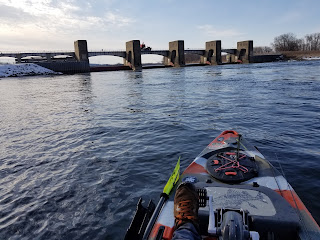 We end up working our way through the parking lot of boats to the furthest point we can fish by the dam (DNR has a sign up about 50 yards from the dam that says we can't get closer until May).  I temporarily land the kayak for a bio break (urinating in a kayak with multiple layers in hypothermic conditions is exponentially more difficult than it is in the summer).  We then decide to make our way back into the strong headwind (though slightly better than the morning) back to the launch.  This is when I discover the beauty of the new pedal drive system from Feelfree.  I'm able to pedal into the current more efficiently than paddle.

A not-so-short time later we are entering the dock area of Everts Resort.  We have grown accustomed to hundreds of looks and photos from boaters thinking we were nuts.  A group of walleye fisherman in a beautiful walleye boat idle near us and ask how we did.  We tell them it was slow, but we caught a couple.  They asked, "Was it a little rough out there for ya today?".  I smile and say, "Oh yeah".  But we made it, we had fun, and will live to fish another day....  We'll be back, next time in safer conditions and more fish.  Even so, I wouldn't trade my kayak for the most expensive of fishing boats.  I've never been so at peace or caught bigger fish in my life. 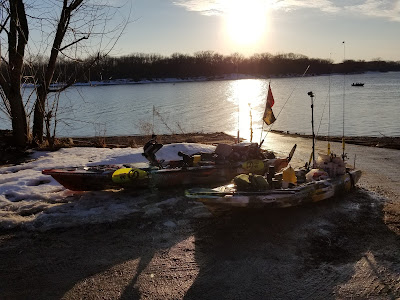