By Small Craft Fisherman July 17, 2016
This weekend was the Mountain State Kayak Angler's charity tournament hosted by Kayak Bass Fishing and TourneyX.  Excited for my first day-long, nationwide tournament, preparations began early in hopes to snag one of the 10 Kayak Bass Fishing National Championship qualifying spots.  The preparations began last week with a pre-fish on the Mississippi River.  I knew the Mississippi was my only chance of holding a candle to the southern competitors.  As documented in the article "Pregame", the pre-fish went well.  My location was chosen. 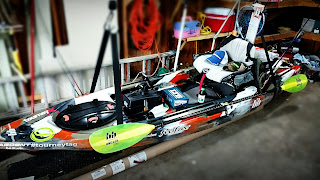 Preparations continued this week with a cleaning and application of UV protectant on my FeelFree Lure, which made it sparkle like new.  I also re-stocked my Lunkerhunt frog supply to have a few color options.  Lastly, I stripped my kayak down to tournament mode (removed my camera poles).  I wanted to minimize my accessories to maximize my fishing time.  I also knew some of the backwaters required a low profile navigating fallen trees.  I loaded everything up the night before, enjoyed a campfire with the family, and went to sleep.

I had a hard time sleeping, both excited and nervous for this all-day tournament.  The waters proved good last week.  But recent local rains, and flooding in northern Wisconsin, made me nervous the conditions may have changed.  Nonetheless, I had to roll the dice.  The Mississippi was my only chance against the southern bass.

My alarm goes off at 4:00 AM (Central Time), and I immediately realize negligence in my planning.  The tournament starts at 6:00 AM Eastern and I have just under 1 hour of driving time to get to the river.  I thank myself for getting everything together the night before as I scurry out the door and head west.

I turn onto the river road that runs along the Mississippi where I catch a glimpse of some backwaters.  They confirm my concern, the water is much higher than during the prefish.  I carry on, arriving at a launch shortly thereafter.

After launching, I immediately head to the pads and mats.  First cast, I have a hit.  In my half-awake excitement, I failed to notice the topwater hit was not the usual splash of a bass.  It was the gulp of a Northern Pike.  I reel it in, remove my frog with some disappointment.  I'm further frustrated when I notice my brand-new frog was torn by the Pike.  Nothing glue can't fix, but not on the water.  Since I caught a Pike during the pre-fish, I'm hopeful this means the fish will be active.  They were.

Over the course of the next couple hours, I find myself battling, and cursing, at the Northern Pike.  They are extremely active.  By the end of the morning hours, I land 7 Northern Pike and 0 bass.  I was able to avoid further frog damage with early hooksets when Pike were hitting, but the damage had been done.  To add salt to my wounds, a Pike large enough to pull me and my kayak upcurrent for a short distance took a frog after shearing my 50lb braid clean off.  With endless mazes of water, it was time to look elsewhere.

For efficiency, I allow the current to carry me towards a bridge while I tie on a new frog.  I float under the bridge and paddle into an area dense with lily pads.  I test the mats and pads for some time, but the constant noise of jon boat motors starting tell me I'm not the only one not seeing success.  I need to figure out where the bass are hiding in the high water.  I head back to my original location and paddle against the current.  I toss a spinner bait against the rip-rap and run it through the vegetation growing along the rocks.  I also pause to try the weed mats again with my frog.  The rocks prove fruitless and the weed mats loaded with Pike.  I continue my paddle upstream. 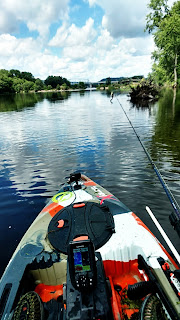 After paddling furiously upstream for a while in an attempt to reach my destination sooner, I arrive at the location where I recently caught a 19.5" bass.  Hopeful it may be hungry again, I work the area with a spinner and frog.  I receive a few hits, but they were half-hearted hits resulting in no hookups.  Carrying on with the paddle, I arrive at down trees.  The gates to the main channel.

I find a  spot near the bottom of one of the trees I should be able to paddle over.  I get a run at it and slide my FeelFree Lure over the top.  I'm now in uncharted territory.  Surrounded by down trees, stumps, weed mats, and lily pads.  Froggin' heaven.  To make a long story short, I make my way all
the way to the main channel with no success.  It seems this part of the river is echoing the bass bite of my primary location.

This entire paddle was upstream.  I allow the current to mostly carry me while I try fishing some key spots.  After no success, I help the current and head back to my original location.  A front is moving in, I hope this brings the bass out of hiding.  My analysis proves correct when I land a bass on the first cast on the up-current end of the weed mat.  Hopeful the pregame bite has returned, I deploy my drag chain and slowly work the mat. 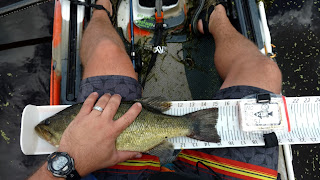 Shortly after the first fish, I get several other hits.  However, they are also half-hearted.  The bass are not as interested today, but they are back.  I continue dissecting the mat when a beautiful, large, bass launches out of the water.  A classic, epic, topwater explosion.  A blur of weeds, water, black, and silver-stained-copper Mississippi bass.  I set the hook, and it is a tank.  I glance at the clock.  One hour from tournament end.  I still have time to bag three fish to put me in the running.  As this thought crosses my mind, my line abruptly stops.  The bass hung me on an underwater structure.  It comes free and I continue my epic battle, oddly easier than when it first started.  I learn the ease came from the bass spitting my frog.  I completed the battle with a healthy quantity of vegetation.  I'm frustrated, but keep my cool.  I still have an hour.

I continue to paddle up the mat and float it back two more times.  I have a few hits, but nothing willing to commit.  With 10 minutes left in the tournament, I allow the current to carry me unabated towards the landing hoping the vegetation and timber in the channel will supply some last-minute bass.  I'm able to get a hit, but nothing landed.

I arrive back at the launch defeated.  The "shoulda" moments run through my head as I shake it off.  I had a great time fishing, caught some nice sized fish (albeit the wrong species), got my first one day tournament experience, learned some valuable lessons, and did this all for a great cause.  Today was a good day.  Extremely sore and tired, it was time to load up, cross the river for a family event in Minnesota, return home to lick my wounds, and start preparing for my next day-long tournament.
ardent reels bass bending branches bite me bait shop charity feelfree feelfree kayak fishing kayak kayak bass fishing kbf paddle rulethewater tourney tag tourney x