By Small Craft Fisherman July 24, 2016
After last week's day-long charity tournament, I spent the week recovering and licking my wounds.  The winds, Mississippi river current, and Northern Pike left me quite sore.  My mind was still on my next fishing trip, this one at a slower pace.

One of my local fishing buddies and I were looking to get together and hit the water.  We discussed and planned to fish my local waters.  As mentioned in my previous posts, it has been a tough bite on my home waters this year since the re-freeze during the spawn.  However, he had fished them the week prior and said the topwater action was good the week prior.  We will meet at dawn.

In my excitement to fish with a buddy on my home water, I forget my sonar.  On the redundant trip, I notice more bass boats than usual heading towards the lake.  I opt to launch at a shallow gravel launch opposite the main launch.  My concern is confirmed when I see several bass boats huddling around the launch across the lake.  A local bass club is holding a tournament here.  I'm not concerned, the kayak is maneuverable, everyone just needs to be respectful of each other. 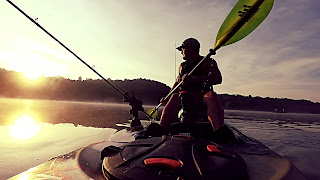 We start our paddle.  I take a moment to enjoy the scenery.  I love sunrise on my home water.  The fog hovers over the water and slowly creeps away as the sun sneaks over the hills.  The orange glow increasing as it crawls up the hills and treetops.  There is a perfect moment, just before the sun overtakes the treetops when everything is still, glowing a beautiful orange before the fog goes into hibernation, the sun normalizes to yellow in the blue skies.  I fish slower, or not at all, in this moment.  In this moment, all is right with the world.

After my moment of Zen passes, I get back to the task at hand and analyze the tournament boats circling the waters.  My topwater addiction has me watching the weed ledge like a hawk.  The boats on it are moving quickly, which I know is too quick to pull a fish off of there this time of day.  They move off the mat and I start paddling at this window of opportunity to claim this spot.

Upon arrival, I alternate between topwater on the mat and cranking the ledge.  My Garmin Striker marked fish suspended on the ledge.  But I always yearn for those majestic topwater blowups.  But I accept the fact that my gut and electronics tell me they are deeper.  This is confirmed by my rod doubling over while running my crankbait on the ledge.

The bass hit on my crankbait's ascend from the depths directly beneath my kayak.  My current cranking setup is my backup baitcaster spooled with 12lb mono.  I am new to cranking, never interested in trying it before, but Fishing with Phil got me addicted with some great tips on proper cranking.  Next year I'll add an official cranking rod to my lineup, but I digress.

This rod hasn't bent like this since I caught a 21" Chippewa River smallie in fast currents last year.  Just as I'm entering shock from the force of this bass, it exposes its side below my kayak.  This is possibly my personal best bass.  As the fish rights itself, my 12lb mono snaps and I snap out of my state of shock.  This fight had two fatal flaws.  I went into shock with a severe case of Bass Fever.  Secondly, this backup rod was previously spooled with 50lb braid.  I had the drag too tight for pulling in a large fish on mono.  I loosen my drag, shake off the disappointment, and tie on another crank.

A bit gun-shy from the loss of such a tank, I work the mats.  My buddy and I are able to coax some small bass with frogs.  But since Fishing with Phil gave me the knowledge to try cranking, it has nearly reached my topwater addiction level.  I give into the urge and toss a deep diving crank. 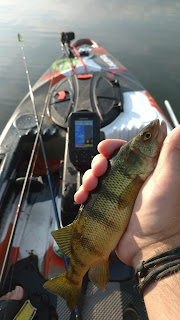 I've found a new technique while cranking on a kayak.  In calm conditions, larger crankbaits will slowly pull the kayak in their direction. This movement also reduces the depth of the crank.  I use the technique to target the fish suspended at 8 feet, working back-and-forth in channels without touching my paddle.  The technique shows successful when I unexpectedly pull a reasonably sized Yellow Perch out of the water.  A brave fish biting at a crank 3/4 its own size.

We keep working the weed mat into a bay abandoned by the tournament anglers.  I work the end of the bay with topwater lures.  I miss a couple weak bites and slow my retrieve.  The slower retrieve proves successful, fish on!  This is a smaller fish, but still fun.  I use this as an opportunity to draw some tournament guys.  Making a spectacle of the retrieve, I keep the fish low when I verify its length (14"), and let out a "woo!".  I tell my buddy, "Look, now boats are heading this way."  With a chuckle, we continue fishing.

The sun higher in the sky, he suggests trying further in the weed mats.  This shallow area is thick and inaccessible by motorized craft.  With three boats having now migrated to this bay where I caught my "monster", we glide into the thick mats.

A couple casts in, my buddy locates several bass.  He pulls two out of the thick within minutes of each other.  We enjoy watching the bass boats watch our success outside of their reach.  All but one of the boats had been kind and respectful this morning (one of them decided casting right next to my kayak was his best chance of catching fish).  We still enjoy messing with them a bit.

After fishing the mats a bit longer without success, we head upriver to scout another area inaccessible to boats.  Unfortunately, the water is cold and murky from recent rains.  The fish aren't interested in feeding.  With an ominous sky to the west, and severe storms foretasted, we head back to the launch and call it a day.

This was a great trip.  The bite was a bit slow, but we both caught a few.  I was able to slow things down and enjoy the scenery (and have fun with some tournament bass boats).  This is my normal, and I'm happy it is returning after a challenging bite this year on my home waters.