By Small Craft Fisherman May 15, 2016
"When life throws you lemons, make lemonade.", or so they say.  I prefer to take said lemonade, add vodka, and have a party.  Today's lemon was the weather.  My vodka was my family.

Terrible weather coupled with equipment neglect yesterday made me eager to hit the water today.  After a nice day with the family, and a poor weather report for the following morning, I decided to sleep in.  When I awoke to the smiles of my wife and kids and a hard frost, my decision was confirmed.  The temperature outside was 25 degrees.

During my lazy Sunday morning with the family, I fired up the DVR and watched the latest episode of Knot Right Kayak Fishing.  This made me think of my newly strung poles, recharged battery, and dwindling KBF/TourneyX tournament standing.

My daughter and I formulated a plan.  I would hit the water, break in my new line, and attempt to regain my top three position in the tournament.  Once the temperature rose to an appropriate level for the time of year, I would text my wife.  They would join me at the beach for a photo op with my wife's professional camera.  My daughter and I would stay behind to play in the sand and fish.

After my load-drive-unload ritual, I'm on the water.  The wind had picked up but is manageable on the lake.  My new crate and tankwell configuration on my FeelFree Lure is lower.  I notice the setup is much better.  No longer is my tall crate catching the wind. 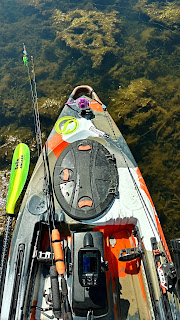 The water temperature is borderline shallow/top-water action.  My Garmin Striker shows a borderline temperature of 52 degrees.  Hopeful the unseasonably cold temperatures did not impact the bass, I head to the spawning grounds.

I cross my toes as I toss my buzzbait.  The wind has already picked up to the foretasted 10-15 MPH.  I'm hopeful it will still draw bass in the 1-2 feet of water.  No luck.  I experiment with tossing a joined swimbait and plastic swimbait into the shallows and up the ledge.  No luck.

I hesitantly migrate to the shallow bay where I witnessed heavy spawning activity last week.  I gently drift into the bay and spook a nice Largemouth off a bed.  With the eagerness of a child tearing open presents on Christmas morning, I quickly tie a frog on my baitcaster.  They are still shallow!!!!! 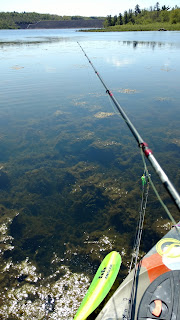 The water is crystal clear in the bay.  An oddity given the rain and otherwise stained waters of the reservoir.  I'm able to stand and sight fish the waters in my FeelFree Lure.  I tried my buzzbait, several finesse plastics, and the frog.  Though I spot many nice Largemouth, none are interested in what I have to offer.  Having planned a photo session, my wife texts to confirm they are on the way.  Perfect timing.

My family arrives and we take many photos.  Be sure to check out my Instagram account to see more photos. 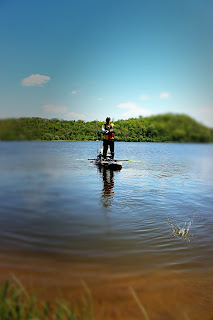 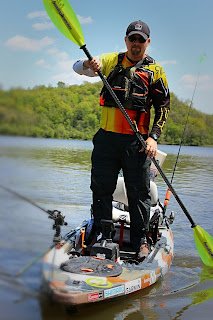 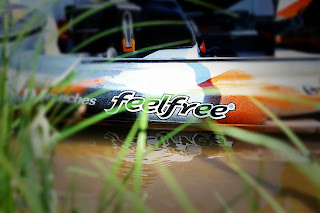 I pull up to the beach to say hello to my daughter.  She had previously expressed interest in joining me on the kayak, but I didn't think she would want to on this windy day.  Much to my surprise, she asked if she could go for a "ride".  Luckily, I had preemptively placed her PFD in the hatch.  I put away my fishing gear, helped her put on her PFD, and we were floating.  She loved it, but the wind on the water was a bit frigid. 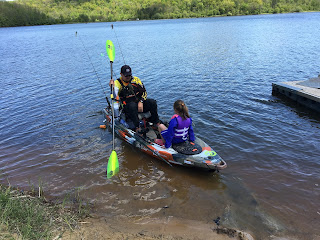 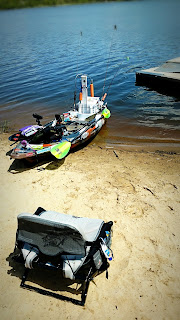 We beached the kayak.  She used my FeelFree Lure's Gravity Seat on the beach while I attempted to snag the many fish I was marking during our short paddle.  After unsuccessful attempts to rip lips from shore, my daughter opted to land the kayak. 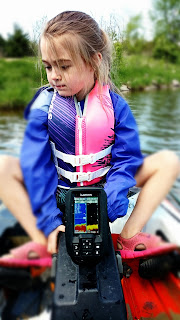 "Where is the Jeep?", she asked.  I pointed around the bluff, where the boat landing was.  With a smile, she starts putting on her PFD as I begin packing my fishing gear for the float to the ramp.  We board the kayak and paddle to the ramp.  I am sure to take time to point out the beautiful rock ledges and trees.  I also show her how to read my Garmin Striker.  As my First Mate, she begins calling out fish, structures, and the water depth.

Upon arriving at the dock, we receive the usual stares.  My FeelFree Lure has drawn the attention of people driving past my house, people in the parking lots/boat ramps, boaters on the water, and kayakers on the water.  With a small audience, we land.  My daughter has now become accustomed to the stability of the FeelFree Lure and eagerly walks up the bow and steps onto land.  I do the same. 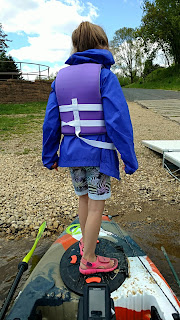 I proceed to use the wheel in the keel of my Lure to push it up towards the trailer.  My daughter attempts to help.  Weighing in at twice her weight plus gear, she is unsuccessful. 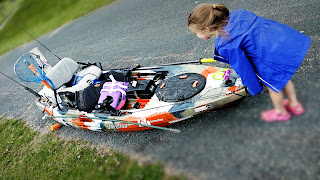 We prepare the kayak for transport and enjoy some time at the park near the boat ramp.  We head home with smiles on our faces.  My son, jealous that his sister was able to ride on my Lure, borrows his older sister's Tinkerbell pole.  He is a future kayak angler in the making. 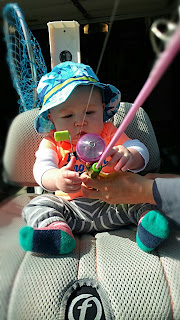 I love fishing.  I have increased my involvement by starting my fishing tournament career.  I love the challenge and competition of the tournament.  By tournament fishing standards, today was a failure.  However, I still choose to take the lemons the weather handed me today and make lemon vodka.  I enjoyed my time on my kayak fishing.  I enjoyed sharing the outdoors with my family.  My daughter also took her first paddle on a kayak and loved it.

If not careful, your passions/hobbies could become a stress in your life.  I'm taking my hobby to the next level, but keeping this in mind, I always make the best of it.  If not careful, I could cross a line and my hobby could become a "job".  In the end, though I did not catch any fish, today was a great day.