By Small Craft Fisherman June 11, 2016
My local reservoir has historically been my go-to fishery.  Anytime I get skunked elsewhere, a couple hours on the water here would produce several fat 16"+ bass.  However, this year, I have left the water a few times confused.  I am marking fish on my Garmin Striker 4DV and physically see them when sightfishing from my FeelFree Lure.  The usual arsenal of lures aren't enticing the big ones anymore.

Yesterday was no exception.  My trip yesterday was a triple-threat mission.  I was on a recon. mission for my cousin, and fellow angler, fishing a local tournament.  I was also on a personal mission to figure out the fish on a low pressure non-weekend day.  The third triad of the mission was to move my name northward on the KBF North Central Great Lakes regional challenge.

A quick survey the day prior was promising.  The lake is historically stained from creek runoff into the river feeding the lake.  However, several boats fishing the lake on a Thursday were a bit concerning.  This is a fairly small body of water and it has received more traffic/pressure than usual. 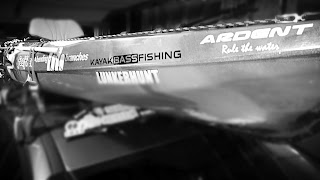 Feeling optimistic that evening, I go through my ritual of loading the kayak and equipment to mitigate leaving something critical behind in my pre-coffee zombie state the following morning.  I am eager to try my new Ardent rod and reel, initially impressed with the light weight and smooth spooling.  I'm also looking forward to trying the new Gliss line on my spinning reel.

I roll out of bed and enter my fishing morning auto-pilot routine.  Upon arrival at the lake, I'm joined by a few boats.  More traffic than usual for a weekday, but I proceed with my my unloading/rigging ritual and launch.

The already warm air temperature and light breeze ripples on the water confirm the weatherman's prediction of a sweltering 90+ degree day is likely accurate.  As a Wisconsinite, I am used to -30 degree weather, not 90.  My goal is to complete my mission before noon so I don't melt. 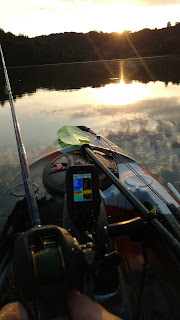 I target the mats with the Lunkerhunt frog first.  The bluegill are active eating bugs, now easily visible now illuminated by the rising sun.  The bottom of the shallows look like huge golf ball dimples, a sure sign the bluegill spawn is on.  My new Ardent rod and reel are performing beautifully.  My casting distance has increased exponentially with this light, smooth setup.  However, the bass are not interested in the frog.

I move to deeper water, keeping an eye on my Garmin Striker 4DV.  Marking fish deeper, I start working my spinning setup with various plastics, primarily a wacky rig.  I'm immediately impressed by the new Gliss line.  It is hands-down the smoothest casting line I have ever used.  It is extremely thin and sensitive.  I feel every bump while working it on the bottom.  I've historically struggled with line twist and curl on my smaller spinning reels.  Gliss has now solved that for me.

Though pleased with my new equipment, I'm not pleased with the bite.  I relocate to the rock bank, hoping they are suspended near rocks with the sharp temperature changes.  I slowly dissect the bank with a spinner bait, frog, and plastics.  All prove fruitless until I near the edge of the rocks.  I receive a hit on my Lunkerhunt frog.  The hit is weak, almost like a hesitant test bite on the fish's part.  No hookup. 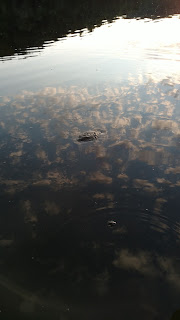 I continue moving around the water, my only bass action is a few more half-hearted bites too weak for a hookup.  On the bright side, I have fell in love with my new Ardent and Gliss gear.  I typically found myself with several backlashes (professional overruns).  With my Ardent reel, I honestly had zero backlashes.

While stealthily paddling in my FeelFree Lure with my Bending Branches Angler Pro, I was able to bump into a large snapping turtle.  Even after bumping it, the turtle casually floated away.  Apparently it was not intimidated by a kayak.  I also nearly grabbed a large carp with my hand.  It only darted away after putting my hand in the water above its head.  Though fun, and proof of the stealthy capabilities of kayak fishing, these did not satisfy my mission.  I have officially spent days of confused on my home water this season.

The season here started great.  During the spawn, a cold snap hit and exponentially dropped the water temperature.  Since then, the large bass have been turned off completely. Additionally, the reservoir has received an unusual amount of pressure this year.  Typically a weekend would consist of 4-6 boats and 1-2 kayaks fishing.  This year I have seen as many as 10 boats and 14 kayaks in a given day.  Word has gotten out on this fishery.

Though disappointing, I am going to use this as an opportunity to fish other waters.  Wisconsin is lucky to have thousands of lakes **cough - cough** more than Minnesota (but love their waters too)....  I am lucky to live in Western Wisconsin where I have hundreds of Wisconsin and Minnesota lakes within an hour's drive.  I also have the St. Croix and Mississippi nearby.  It is time to expand out of my comfort zone and learn other waters.

Stay tuned as I share my new adventures.  My biggest adventure is coming the week of June 20th when I have a week off my day job for a week of family and fishing!  I even rented a kayak from Stout Adventures so my brother-in-law can join me in kayak fishing.  Expect pictures, posts, and videos!  Be sure to subscribe to my YouTube channel to catch it all!
ardent reels bass bending branches feelfree feelfree kayak fishing kayak kayak bass fishing kbf paddle rulethewater tourney x