By Small Craft Fisherman June 18, 2016
Those who have been reading my posts have read about my challenges this year on my home water.  Typically a great fishery, this year has been challenging.  It started out great but a Wisconsin cold snap during the spawn completely changed the fish patterns and preferences.  The slow Wisconsin thaw also left the water unusually clear (cow manure and the like did not runoff into creeks and streams that feed the lake).  That all changed this last week with a significant amount of rain.  The water has returned to its murky self and the weed mats have  returned to their usual positions.  I decided to hit the water this evening after work to kick off my whole-week-off-my-day-job fishing extravaganza hoping the normalized fishery would move me up in the KBF/TourneyX tournament I'm participating in.

As I launch my FeelFree Lure, I smile at the murky water I'm used to.  After spending some time trying a buzz bait, crank baits, and a ned rig on the ledges, they prove unsuccessful.  Since my "home field" has returned to its normal self, I return home with my go-to setup.  My Ardent Tournament baitcaster, Ardent topwater rod, and Lunkerhunt hollow body frog.  I head towards a large weed mat near a steep ledge.  A couple casts in, I have a topwater blowup.  The fish is large, but in my excitement, I did not get a good hookset and lose the lunker. 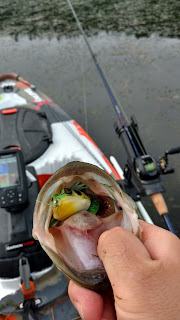 Within the next several minutes, I get several hits and land a fish.  Excited to add to my overall length in the tournament, I snap a photo of the small, but helpful, fish.  I continue to work the weed bed along the ledge.  I land another fish.  While fumbling for my phone to snap a picture for the tournament, I loosen my grip on the fish while it sits on my hawg trough.  It takes the opportunity to self-release.  I think it smiled as it hit the water and swam away...  Its OK, more to come.

I'm joined on the weed mat by a boat with a father and his two young boys.  I'm not keen on sharing my fishing hotspot, but gladly move down the mat.  As a father, I love seeing youth exposed the to the outdoors.  Shortly after their arrival, I hear the boys yelling in excitement.  The father hooked and landed a nice bass. I heard them announce it was 18.5" inches and pose for father-son photo ops.  As they release the fish, I hear the youngest boy yell, "That was awesome - we should do this all night long!"  This brings a smile to my face and decide to let them have this mat, having worked it thoroughly catching (and missing) several fish.

Moving to a shallow flat with submerged weeds, I toss my frog.  I am not prepared for a first-cast hit. Distracted, I hear a splashing noise.  Looking up, my frog is gone.  My line is slack.  I give it a few reels and a tug.  Fish on!  I set the hook and pull it in.  Smaller than I would have liked, but it gets me my third and final fish for the tournament.

I work the flat, getting a few hits.  Near the end of the mat, a bass blows up on my frog.  I set the hook and my line goes slack.....after several missed hook sets and landed fish, I failed to check my knot.  My frog is gone.  As I begin to mourn the loss of my frog, the bass jumps into the air, spitting out the frog.  I approach to retrieve it and the bass jumps again.  Upon arrival at my frog I realize why.  My frog is hook-free.  The holes for the hooks are exposed and the frog body sinks down the deep ledge.  The second jump was the fish throwing the hooks. 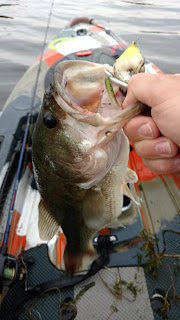 I tie on another Lunkerhunt frog, slightly darker in color, as the sun drops,  The previously calm wind picks up and gently ripples the water.  I toss the frog and get a hit.  As I crank in my catch, it turns in the water and reveals its size.  This isn't a dink.  This is a typical hog I'm used to finding in these waters!  I pull it in, draw my net, and land the nice fish.

I pull out the hawg trough and am slightly disappointed by the length, just under 18".  Given the girth of the fish, I expected longer.  However, the longer fish helps my tournament score and it was a fun catch.  It weighs in at 3.5 pounds.  I snap some pictures, appreciating my TourneyTag holding my tournament identifier, and release her to make more pigs.

I continue to work the weed mats and get a few more bites.  I don't land anything huge, but big enough to replace some smaller fish in my tournament "bag".  The topwater activity comes to an abrupt halt as the sun sets, casting a beautiful purple and pink color across the sky. 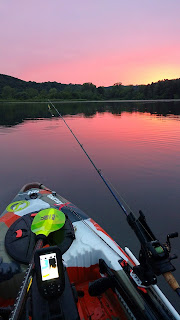 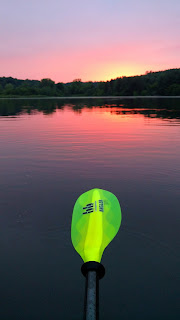 I take a moment to enjoy the beauty of the evening.  The fish, though not the usual tanks, were biting.  My home waters are nearly back to normal, and mother nature gave me a nightcap in the form of a breathtaking sunset.  This is what I love about fishing.  The pursuit, the adrenaline rush of catching the fish, the anticipation while reeling it in, and the beauty of the outdoors.  Kayak fishing has taken this love to a whole new level.  The kayak brings me closer to nature and the water.  It allows me to experience new areas of the outdoors in ways I couldn't in a boat.  Thank you for letting me share my passion with you.


I captured this adventure on video as well, be sure to subscribe to my YouTube channel to get notified when the video is ready!