By Small Craft Fisherman October 20, 2016
It is well known the bass are larger in the south.  They grow and feed all year.  In the northern states, there are lunkers out there.  However, they are more of a rarity.  Typically I land one 20" bass in a season.  The rest are respectable, fat, fish, but not the "lunker" length.  This year has been different.

Sure, I've spent exponentially more time on the water this year than in the past.  I have also spent more time refining my techniques.  Both have contributed to increased success in my season.  I attribute both to kayak fishing.  My FeelFree Lure allows me to explore and dissect waters I had never considered before, even in my john boat.  Since I can't fire up my gas motor and cruise to a new spot, I am forced to increase my attention to detail.  This includes careful planning of launch sites, keen observation of structure, and refinement of my fishing techniques.  The kayak forces you slow down and fish.  I've even pulled several respectable fish out of water just fished by bass boats.  Just like I did with a trolling motor, they tend to fish areas too quickly.

In Wisconsin the leaves are falling as is the temperature.  This is a magical time of year for the bass bite in the north.  Bass are loading up on calories to fatten up in preparation for the winter.  An amazing time to load up on tank bass with the right lures and techniques.  My favorite fishing is topwater frog, but fall is the season for my second-favorite method - spinner baits.

My good buddy Chang Lor of www.cxfishing.com and I planned a trip to a local small lake.  We know large fish lurk within, but they were ultra-rare during the summer.  We decide to try our hand at the fall bite to see if we can locate the big ones.

On this particular fall day, the stars were aligned perfectly for fall bassin'.  The barometer was dropping, the skies overcast, the air temperature slightly mild for October, a light drizzle falling, and water temps in the low 50s.  All was right with the world.  We just didn't know how right it would be.

We start out the morning before light.  We go through our rigging routines and are off.  We start working the dark glass water.  Other than the migrating waterfowl, we have the lake to ourselves.  The wind is strong, and we let it carry us towards the main body of water while I run my Northland Tackle spinner bait through the vegetation, which is slowly disappearing due to the heavy rains and cold nights.  A perfect density for running a spinner above the monsters laying in the weeds, waiting for an opportunity ambush.

I toss my spinner slightly past a dying patch of lily pads, a promising source of cover and begin my retrieve.  As the lure nears my kayak, it stops abruptly.  Snags are inevitable when working large weed beds.  I usually leverage the power of my Ardent Apex Pro and Denny Brauer rod with 50lb braid to yank and burn the spinner through the patch of weeds.  This maneuver proved fruitless, so I began pulling in the heavy vegetation.  A couple of cranks in, the vegetation shook and moved.  Fish on!

Like a cowboy in the old west, I quick draw my net from my crate and sling the tank into it.  A beautiful largemouth measuring 20".  An unbelievable first fish of the day.  And my second 20"+ fish in under a month!  I was elated as I snapped the pictures and submitted them to TourneyX for my regional Kayak Bass Fishing monthly tournament.  I usually catch one 20" fish a season, so I expected the rest of the day to consist of typical Wisconsin fish (17" - 18"), which I would have been happy with.  I never expected what was to come. 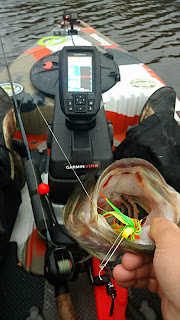 Seeking refuge from the strong winds, we paddle upwind and into a slough connected to the lake.  I'm able to land several small bass, including one smaller than my spinner bait (a highly confident little fella that should make a nice bass someday).  Floating out of the bay, I pull a few pieces of garbage from the water and land a small Northern Pike.

Chang and I float deeper into the slough, an area he found success in the last week.  I toss my spinner bait and almost immediately I feel a bite.  I set the hook and begin reeling.  At first, the power of my setup makes the fight easy.  Then my rod doubles over.  I have my drag at max tightness since I am running 50lb braid, but the fish manages to take a bit out.  This has to be one of the 30"+ Northern Pike known to roam this lake.  The only bass that has managed this feat was the 22" river smallmouth I caught last year.  A lake largemouth surely cannot replicate such an action.  I was wrong.

A short battle later, I see the flash of the side of a fish.  Except this flash is shorter and fatter than expected.  It is a tank bass!  The tank is so heavy, I can barely perform my usual flip into my net, which is quite difficult to hold filled with this beautiful aquatic beast.

I remove my spinner from its mouth, noticing my entire fist fits in its mouth!  I'm in awe with this beast, my longest and heaviest fish of the year.  It weighed just under 6.5 lbs and measured in at 21.25".  The large Northern Pike have done a number on this beast over the years.  It is scarred and missing the top of its tail.  This fish was a beautiful warrior. 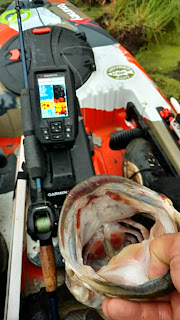 After measuring and snapping the pictures, I carefully release it back to the murky depths from which it came.  Smiling as I seen it gracefully swim away, understanding it needed to conserve its energy for the next victim, hopefully without a human connected to it. 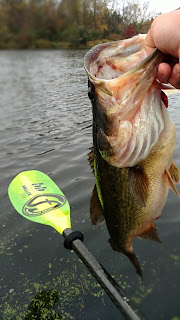 While doing my photo-catch-release followed by a submission to TourneyX.com, Chang had begun working the remaining parts of the bay.  I always have several spares of the main Northland Tackle spinner bait colors.  I use them so much, and they catch so many fish, I end up snagging them up or breaking them at some point.  I grab a spare and head towards Chang.  Handing him one, I insist he tie it on.

We manage to land a couple small Northern Pike in the remainder of the bay.  I spook several large fish out of a shallow area with weed mats.  My addiction to frogging kicks in and I tie on my popper frog.  I finally put the frog away for the remainder of the season after working the entire area of mats without success.  The rain picks up, I have my Frogg Togg rain suit on, but it is a good opportunity for a lunch break.  We head to the bridge that crosses the lake and take a few moments to eat and relax on the shore under the bridge. 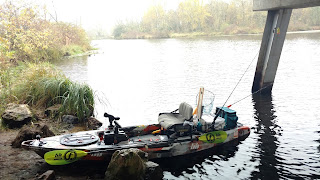 While I'm enjoying delicious Wisconsin cheese and beef, Chang ties on a different lure and gives it a toss, getting bites nearly every cast.  He eventually lands a small bass.  His eventual snagging of the lure is our sign to re-enter the kayaks.  He un-snags his lure while I finish the last few pieces of food.  After spending some time fishing the deep water under the bridge without success, Chang puts on a poncho and we head out into the rain, allowing the wind to carry us back towards the main body of the lake.

Chang and I work opposite sides of the lake, the "divide and conquer" technique we typically use to locate the fish.  I pull a small Northern Pike off some structure but find myself pulling in nothing but the thick weeds thereafter.  After we have worked our way about halfway down the length of the lake, I hear the international long distance call for "Fish On!".  Chang yells "Wooooooo!", my cue to head his way.

I traverse the lake, wondering if he lost the fish.  He is battling the wind with his paddle and the fish with his rod and reel.  He has to carefully switch between the two as I see splashing and thrashing next to his kayak.  The wind carries his voice as I hear him yell, "Huge Pike!".  I arrive at his kayak and he has a nice sized Northern Pike in his fish grip.  A beautiful fish that put up an amazing battle.  We opt not to measure or weigh it.  The pike is smaller than one he caught recently, so he opts to let it go.  It is surely tired after the long fight and needs to get back in the water quickly to recover.

This side of the lake has been historically more productive for us, so we float the same side, targeting different weed beds.  Shortly thereafter, I hear another "Woooo!".  This time, upon arrival, Chang pulls a tank largemouth out of the water.  An amazing fall fat bass measuring in at 20" and over 5lbs.  A beautiful fish in its extra large fall forage form.  We cannot believe what the lake and day have produced.  I've never caught more than one 20" bass in a season, let alone two in a day, three in a month.  This is an amazing fall season after a tough spring/summer bite.  Allowing the wind to carry us the remaining length of the lake, we pull in a few small bass and pike.  We point our bows into the wind and paddle back upwind to float the same stretch again.

This time, I hear an even louder "Wooo!" from Chang.  This time his rod is bent further and his kayak moving faster from the power of the fish.  He has a massive pike on, one strong enough to take out his drag, not an easy feat with his braid and tight drag setting.  Unfortunately, the bony mouth of the giant did not allow for a good hookset.  The beast slips free just as Chang gets it to the kayak.  After working the area a short while longer, we opt to head back to the slough as the wind has again gained strength.

We encounter a fellow fishing buddy we fished with this summer.  Our big fish inspired him to hit the water on this rainy day.  He is fishing deep, us shallow, so we wish him well and continue into the slough.

We are able to land a couple smaller bass and Chang another large pike.  As the bite slows, I become increasingly self-aware.  I'm now less focused on the water and fish.  My arms ache and my hands are swollen and throbbing.  I still haven't fully recovered from the tournament push in September.  The large fish and strong winds of the day have made my aches and pains return.  We do our "last cast" (about another 30 minutes of fishing), and call it (one hell of) a day.

We leave exhausted, with huge smiles on our faces.  My battle wounds include epic bass thumb and a thumb gashed open from a mishap from a Northern Pike.  This was certainly an epic day I will always remember.  The best fishing of my life with a good friend.  This is why we kayak fish. 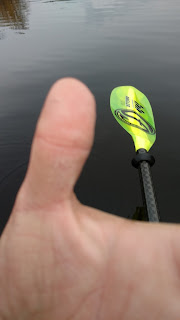