By Small Craft Fisherman October 16, 2016
After spending some time recovering from my tournament push that started in my article "I'm Back - The Saga Begins", I was ready to hit the water again.  I had already washed and polished my FeelFree Lure, it was looking like new.  My gear was loaded up and ready to go.  I had spent the last few days seeing my Facebook feed filled with kayak anglers catching toads as the fall bite was ramping up.  I was ready for a piece of that action.  When I was in "tournament mode", I had left my Garmin VIRB action cam at home.  I was looking forward to again documenting my adventure.

I woke up before light to frost surrounding my house.  The thermometer read 27 degrees.  Having anticipated these conditions, I had prepared my winter fat biking gear (Under Armour cold gear, athletic pants, and a performance sweatshirt.  Upon arriving at the lake, I covered my pants in my rain gear pants to deflect any paddle splash.

The lake was covered in a thick fog, a normalcy this time of year as the frigid nights pull heat from the water.  Fall colors are at their peak, some of which matching my FeelFree Lure's camo orange beautifully.  After going through my unload-and-rig routine, I launch next to a nice guy with a beautiful Ranger boat.  We exchange dock talk, he asks questions about my kayak, we wish each other good luck, and I paddle on. 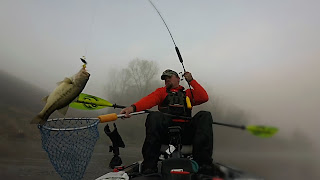 I start with my fall go-to, a Northland Tackle spinner bait.  A few casts and that classic spinner bait hookup feeling is in my hands.  The tick of the blades coming back through my line and down the rod abruptly stop as the pole dips and the line darts in another direction.  I set the hook and am greeted by a beautiful, fat, 17.75" largemouth bass emerging from the water.  I take a brief moment to admire this beautiful fish, then capture the photos for upload to TourneyX.com before releasing it back into the murky water.

I make a few paddle strokes east and give another cast.  I get the same sensation, except this time is different.  Usually my Ardent reels spooled with 50lb. braid effortlessly pull bass in.  This one was putting up a fight, diving hard.  It took some effort to get it within net range.  Once landed, I was in disbelief.  This fish was a healthy fall forager, measuring 19.75".  A very nice fish by Wisconsin standards that I weigh at 4.5 lbs.  I again took a moment to admire the beautiful fish before releasing it.

Luckily, this all happened while the fog still thick so the other fishing boats didn't see.  I continue working the bank and continue to be greeted by a variety of fish.  Even the smaller fish are building a healthy girth in preparation for the inevitable harsh Wisconsin winter.  A 16.5" fish puts me in 2nd place in the October regional tournament within an hour.  I'm in awe.  This is how this fishery used to be.

The bite slows as the sun rises, burning the fog away.  Time to switch spinner bait colors.  It was a good call, because I immediately land an 18.75" largemouth.  A beautiful, large fish.  I'm now tied for 2nd place within 90 minutes!  Unbelievable......

I continue working the key areas, able to land a few small bass.  But the larger ones have turned off, likely heading for deeper water to seek shelter from the sunlight in the now weedless fall water.  As a last hoorah, I try doing some cranking but am also unsuccessful.  I decide to head in and spend the afternoon with the family, the most successful day I've had in a while in the books.