By Small Craft Fisherman October 30, 2016
I lived in Central Wisconsin for 7 years but never fished it much (I had a first baby, first house, while working full-time, getting certified in my day-job field, and attending college full time).  Kayak fishing is huge in the area.  I've had the privilege to fish with some of the guys in that area, such as The Wisconsin Bass Yaker and other amazing members of the Wisconsin Kayak Fishing Club.  Having been so busy this summer, heading east to my old stompin' grounds was on my 2016 season bucket list.  The opportunity arose when FeelFree HQ contacted me about helping a customer.  I was happy to, and it gave me an opportunity to fish over there. 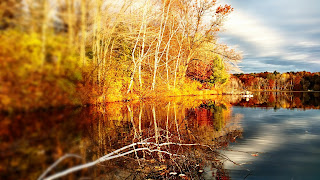 I reached out to the guys and planned for a 6:30 AM meet at their place (a 4 AM departure required from my house in Western Wisconsin).  The decided to take me to a honey-hole they discovered in the Northwoods (for those of you not familiar with Wisconsin geography, the Northwoods is a place that consists of most of the northern part of Wisconsin with unparalleled beauty - enter Leinenkugels commercial).  We venture about 30 minutes north into the Northwoods and launch our kayaks on this pristine body of water.  I'm honored to learn I'm the first these brothers have taken to this spot.  We eagerly launch in the beautiful fall morning.  The sun tries to burn through the overcast skies.  It succeeds just enough to light the fall colors afire for a short period of time.  Across the lake, where the sun first touched, I can see the heat escaping the water as it prepares to cover itself in ice. 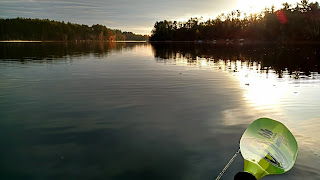 We begin working the brush piles and other structures.  Not too long after launching, I hear "Fish on!".  One of the guys had hooked into a respectable bass.  A promising sign for the day.  Not too many casts after, I toss my spinner bait against a wood dock.  In true fashion of big fall largemouth, I feel a snag and begin cranking it in.  I didn't realize it was a fish until it finally moved, splashing the top of the water.  A respectable 18.75" bass.  The wind picks up and we split up.  I continue my fall spinner bait techniques and get several bites, but the fish are being picky. 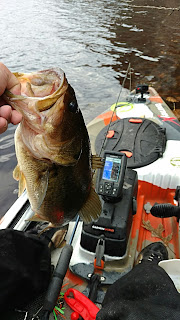 As I work a section of bank, I realize it isn't ideal for holding bass, so I move on.  A large tree down in the water is calling my name.  A beam of light is highlighting its perfection as a bass hideout.  As I paddle closer, I hear the hum of angels (it was probably actually the Jake Brake of a truck on the nearby highway).  I toss my spinner exactly where I want it.  Between a gap in the limbs, near the shore.  I begin rolling it through the limbs and vegetation.  A few short cranks and I see a large silver flash.  A largemouth t-bones the spinner bait and my rod doubles over.  After a short fight (my Ardent Apex Pro and Denny Brauer rod haul in bass with ease), I land a respectable 19.5" largemouth.  A beautiful Northwoods fish.

I share my catch with the guys I was with and they started floating my way.  They were only catching Northern Pike.  A few moments later I hear a lot of yelling from across the lake.  I later learned one of them landed a nice 4lb. largemouth on their way to my side of the lake.

We continued working the lake, getting a lot of bites but finding the fish picky.  One of the guys has what we assume to be a nice Pike snap his line.  Shortly after he lands a beautiful 5lb. bass.   After the early, long day we grow tired and meet up with his brother, who reports having landed many Northern Pike.

This beautiful day in the Northwoods of Wisconsin was an amazing experience.  I was able to catch some nice fish while experiencing a beautiful lake.  I also made new friends in the process.  We will certainly be fishing together again.  As one of them said "Some of the best people I meet comes with a fishing pole."  I've met so many amazing people this year while kayak fishing.  It is an unparalleled experience of nature, fishing, and people.  I am truly livin' the dream. 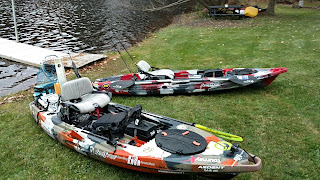