By Unknown October 21, 2016
Hello there everyone! I would like to thank you for going through the several clicks needed to take a look at my first blog post as a part of Small Craft Fisherman.  Needless to say, I am very, very excited and honored to be a new addition to this blog.  I hope I can educate and entertain you through the good, the bad, and the ugly experiences I somehow always manage to have on my kayak.

So my recent experience was a first for me.  After getting let outta work early, I found a few hours on my hands.  Now at this point I was beyond fed up with bank fishing and NEEDED to get out on the yak, plus I really wanted to try out my new micro power pole that I had just installed on the Jackson Kilroy LT.  Unfortunately for me, my go to fishing spot is 40 minutes away and with only 5 hours till I had to be at work for my part time job, I was left searching for some new territory.  I thought about braving out onto the dreaded Lake Decatur (seriously if you don't believe me look up the electrofishing numbers...not good), but my pride got the best of me.  Instead I decided to brave the Sangamon river.  A river less than 3 miles from my house that I had never fished, to be honest no one fishes it except for catfish.  So this is where my adventure begins, taking my kayak onto a river that looks like chocolate milk with no reports of any bass ever being caught from it...sounds promising right? 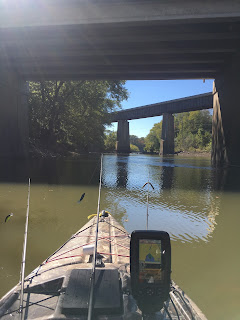 Upon arriving below the dam, which has been known for its gang activity, I loaded up the kayak.  I was rushing around the car and furiously throwing things in all the usual nooks and crannies.  After getting loaded up I began the awful trek down a path covered with boulders and roots. My kayak slipped off my ctug cart at least 10 times, causing me to become even more impatient.  Finally, I arrived on the water, where I tried to understand how to fish this fancy flowing water stuff. I managed to hook into about a 2 pound hybrid striper on a chart/black squarebill crankbait, where I quickly realized I had forgot my net...already off to a great start. I managed to shake him off without hooking any part of my body, always a plus. 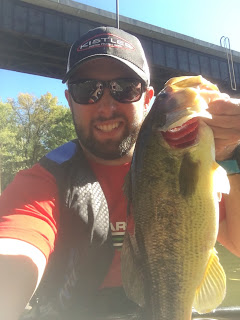 As I made my way down the river, I continued fishing but made sure to take in all the scenery of this new found treasure.  As I floated down the river, I reached a bridge that had a few small eddies underneath it made by some giant boulders.  Of course I managed to wedge my kayak perfectly onto one.  After a minute or two of holding my breath and furiously paddling to free myself, I manage to continue my adventure down river, without going for a swim thankfully!  Upon reaching this bridge that I drive over every single day, I noticed some fishy looking eddies swirling on the down-River side of where I just go stuck. This is where the fishing ramped up! I began flipping a black n blue jig on my  Kistler KLX 7'3 Heavy frog/jig/creature rod with 18lb fluorocarbon.  As the current pushed me past the spot I was fishing, until I was fishing straight behind me. That's when I noticed that subtle tug that we all know too well.  I cracked a hookset and the fight was on.  After battling both the fish and the current, my first river fish was in hand. A nice, chunky largemouth at 17.25 inches long,  I would continue to fish for the next hour or so until I had to paddle my way back upstream to my launch site.  I managed to catch 3 more largemouths with the smallest at 16.5 inches and the biggest at 17.5 inches, no dinks here! I also managed to go for a sleigh ride by hauling in a 24.5 inch Hybrid Striper. 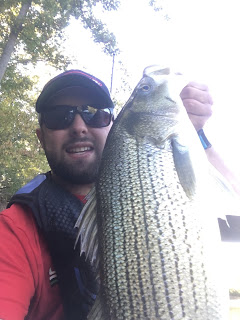 It was an amazing day out on the water, even with the limited amount of time I had to throw a trip together. I even managed to catch some fish, which really surprised me for this new area.  Don't be afraid to try new spots and new types of water.  You never know what they have to offer! JUST REMEMBER TO BE SAFE ON THESE UNFAMILIAR WATERS!

If you want to see my full adventure on video, check it out!